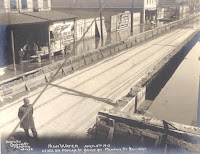 In 1912, the Mississippi River south of Cairo, IL, reached record water levels. In Memphis, where flood level is 34’, the Mississippi reached flood stage on March 24 and stayed above that level for 60 days. That year, the river crested at Memphis twice: on April 6 at 45.3’ and again on May 10th at 38.9’.

Most of the damage in the city was a result of water backing up in the Mississippi’s tributaries: Bayou Gayoso, Lick and Cypress Creeks, a part of Nonconnah Creek, and Wolf River, according to Bobby J. Williams’s Mid-South Views the Floods of 1912 and 1913. 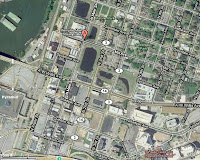 The most severe damage in Memphis was north of the present day Cook Convention Center in the Bayou Gayoso area. Between 700 and 1,200 people were driven from their homes, and the water almost reached Poplar Ave. At Jackson Ave. the water was four to five feet deep between St. Joseph Hospital and the railroad and was approximately four feet deep at North Second and Mill Avenue. 714 houses and more than 25 manufacturing plants were under water during the height of the flood. Refugee camps were set up for Memphians and those in surrounding areas.

Here are some photographs of Memphis during the 1912 flood take by J. C. Coovert. Click on image to enlarge. 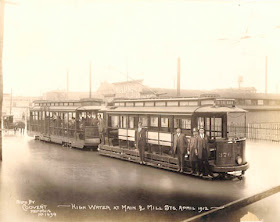 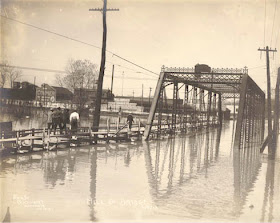